Kramats of the Cape with Cut Above Travel & Tours

A visit to Cape Town is not complete without a Cape Malay experience and this one has you “Enter The Realm Of Legends, Myths and Mysteries“. You get to learn more about the religious and cultural practices along with the heritage that the Kramats (Holy Shrines) mean and bring to this community for over 300 years. The saying goes that the Kramats create a circle of Islam and protection of the Cape.

A visit to the Malay Quarter Bo-Kaap with its colorful houses along with heritage sites, dating back to the 1700’s with the Auwal Mosque being the oldest in the city and country. Discover what these great ancestors’ stories are as well as the traditional wear and learning what a Kuffia is and also getting a taste of the music or melodious prayers are with some info about Retiep and the rich, spicy tasty food too. The journey takes you around the Cape Peninsula to continue showing you the impact and legends of the Cape Malay all along the beautiful coast, from Tana Baru,99 steps to Nurul Mubeen on the Atlantic Coast, along through Hout Bay via Chapman’s Peak Drive (voted one of the most scenic in the world) on to Simon’s Town the Naval Base and Town with a stop at Jubilee Square to see the famous dog “Just Nuisance” the only Able Seaman. In the midst of the Cape’s first Winelands Constantia, you will also find of these Shrines where the next stop is and end off with a traditional Cape Malay dinner with storytelling and learn more about the local slang and Cape Afrikaans/Afrikaaps too and be sure to take your “Barakat” at the end of the day.

Kuffia: headdress for Muslim men
Ratiep: traditional melodious prayers and practices with swords
Barakat: something to take with you which are traditional to the Cape Malay culture´s hospitality.
Afrikaans: One of the official languages
Afrikaaps: A local Cape (Kaap) twist orslang on the Afrikaans language 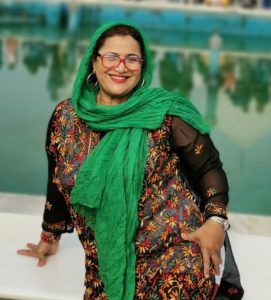 Latifa Cozyn grew up on the False Bay coast, namely Kalk Bay and has an interesting background but what she passionately shares as a tour guide is her proud heritage of Cape Malay traditions and culture.

You will be mesmerised by the stories she shares and find out about her travels and experiences which add to the knowledge and passion of having her being your guide.

Kramats of the Cape with Cut Above Travel & Tours